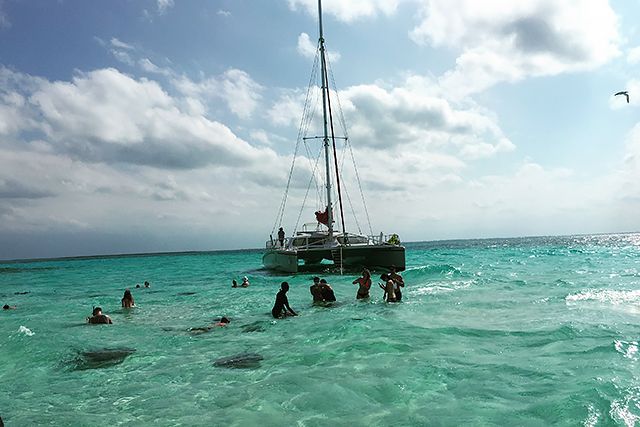 “You’re probably going to have to throw your clothes away after this.” Someone is offering this warning in a van on the way from Guadalajara to Arandas, deep in the heart of Mexico’s Jalisco region. We’re preparing to ride ATVs through the agave fields, where the raw product for tequila is harvested. Apparently, it’s going to be so muddy that everything we’re wearing will end up in the garbage. But it turns out that the dirt is mostly hard-packed, so roaring through the remote fields at 20 miles per hour is as clean as it could theoretically be.

But it’s cold — unseasonably cold for Mexico in the spring. My hands, gripping the handles that rev the gas and pull the break, begin to turn an actual shade of blue. The grey sky threatens a storm. Dogs, presumably there to guard the scattered farms, bark and lunge at our ATVs as we roll by. All feeling leaves my fingers. It’s alarmingly uncomfortable, frigid, and unfamiliar, the sort of situation that sends signals to your brain urging you to stop. But what if you don’t stop? What if you continue riding the ATV through the fields despite any discomfort or resistance? What if you whisper to yourself, Brain, I hear you, but I’m going to do this anyway?

That day in Mexico, as my hands froze to the handlebars, it began to hail (later that night, it snowed; the first time there in at least 20 years). We holed up in a small store in the middle of the fields to wait out the weather and watched a mangy cat gulp down a hot dog whole. There, I saw an aspect of Mexico that would be impossible to see on the usual tourist circuit and I had an experience that would be impossible to plan for. I spent the entire van ride back through the fields considering how miraculous the uncertain can become.

In the past few years, I’ve pushed myself into more and more of these experiences, something that my work as a travel writer has made possible. I drove an Aston Martin 100 miles per hour around a circular track with my hands in my lap (physics!). I got into the ocean with stingrays the size of dogs in Grand Cayman. I went to live in London for five weeks without a real plan. I drag-raced a car in Abu Dhabi. I went into a fancy bar, ordered a drink, and sat alone. I went into a hotel room with a man I barely knew. I climbed a tree in the middle of the Hawaiian jungle. I flew a small plane. I ate shark. I asked for directions to a late-night Paris eatery in questionable French. I said yes when I wanted to say no. I was uncomfortable, in varying degrees, but I did these things anyway.

The perception of discomfort is certainly very different from person to person. As you grow up, the things you don’t want to do become more solidified. You become more set in your ways and less willing to step outside of those developed comfort zones — and some of that is non-negotiable. For example, I hate snorkeling. It makes me feel like I’m going to actually die. I don’t trust the fish (I know) and I have the constant sensation of choking and drowning. I’ve tried it many times, in many oceans, for many years, and I hate it. So, I don’t do it anymore. You shouldn’t have to do something you genuinely know will only make you feel awful, with no reward. But what if you don’t know exactly how you’ll feel? It can be better to push through the fear of the unknown and test the waters.

Traveling, at its best, is very much about leaving your comfort zone. It requires a sense of adventure and a willingness to try new things, even if that new thing is simply flying to Minneapolis for the weekend on a whim. A good way to discover your own place in the world is by surrounding yourself with a foreign culture, a language you don’t know, or customs you’re unfamiliar with. Testing your limits can reveal what you believe about both yourself and those around. It offers a sense of connection you might not have otherwise felt.

When you do something that makes you uncomfortable and you don’t die doing it, it’s a good reminder that your fears may be unfounded and your interests more far-reaching than you ever expected. We build things up in our heads, presuming an array of terrible outcomes. But in reality, it’s usually not so bad (and sometimes, it’s amazing). Traveling solo, for instance, is a source of frequent anxiety for many people. It requires being a companion to yourself at restaurants, at bars, in museums, and on walks. It means potentially feeling exposed when there’s no one else to talk to in public settings. When you travel alone, you have to force yourself out of the hotel room and into the world completely on your own.

But there are ways to tackle that discomfort. Identify exactly what makes you nervous. If you’re anxious about figuring out how to get from the Copenhagen airport to your hotel via public transportation, do some research ahead of time. There are actually YouTube videos that explain how to use the ticket machines in various cities. If you’re uncomfortable with the idea of dining out alone in Berlin or Barcelona, look for restaurants with counters or order while sitting at the bar. If you’ve always wanted to try bungee jumping in Queenstown, New Zealand, but you’re terrified, ask questions. Have an expert explain the gear to you. Then, swallow your fear and do it. That nervous adrenaline will become elation. Or it won’t — but you may still be glad you tried it.

I rarely regret trying something once. A few years ago, during a family reunion, we were rafting down the Colorado River when we came upon an abandoned bridge 30 feet above the water. One dare led to another, and soon my entire extended family was taking turns leaping into the brownish water. I did not want to do it, but I did. I also inadvertently swallowed most of the river, because I was screaming so loud. I will never do it again, but I’m glad I tried. Now, I know what it’s like to leap off a bridge into a river.

I know, too, that I love flying planes and that I want to drive cars as fast as possible down racetracks. I know that my French is good enough to find my way through Paris and that shark kind of tastes like tuna. I know that while I am not always a proponent of meaningless one-night stands, it can be fun to lose yourself in a moment, especially in a foreign city with a foreign man. I know that even when I’m really uncomfortable, when my body is screaming for me to stop, I probably won’t die. And I know that I will always feel much better having done something once than not having done it at all.