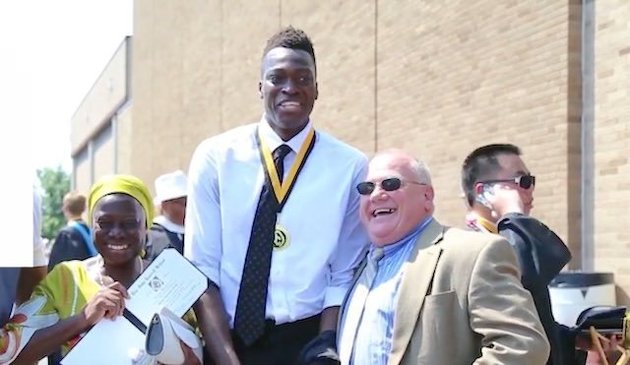 He thought his peers were collecting money for a senior lunch.

But in actuality, the graduating class and faculty at John Carroll School was secretly raising money to fly classmate Mike Tertsea’s mother from Nigeria to Bel Air, Maryland to see him graduate from high school.

Tertsea, who is 6 feet and 10 inches tall, was offered a chance to leave his home of Benue State, Nigeria, at 14 years old to attend school and play basketball as an international student at the John Carroll School, according to CBS. The baller jumped at the opportunity and hasn’t been home since, which means he hadn’t seen his mom, Felicia Ikpum, in four years.

In fact, when the two were reunited in Baltimore Washington International Airport, Ikpum didn’t even recognize her son, describing Tertsea to ABC as “big, bigger, too big … I didn’t recognize him he was so big and he put on weight.”

Yet, on the day of graduation, Tertsea — who received a scholarship to play Division 1 basketball at the University of Rhode Island — could see the look in his mother’s eyes as he walked across the stage to receive his diploma.

“I’m the tallest, so, I saw her standing there [at graduation] and recognized her immediately,” he said. “It was great to have her there to see me move onto the next level, which is college.”

Yet, Ikpum’s journey to see her son graduate wasn’t an easy one. A spokesman for John Carroll School told The Baltimore Sun that Ikpum had to travel for 12 hours over dangerous territory just to get to an airport to fly to the U.S.

“It was a tough drive for her,” Tertsea told The Baltimore Sun. “She said at one point, she felt like giving up.”

But she saw it through, just like John Carroll’s graduating class of 2016 when they made the decision to do something special for Tertsea after reading an article about him in their school newspaper that mentioned that he and his mom struggled to get food and electricity in their village in Nigeria.

“Everyone was having all these ideas,” Kishan Patel, student government president told CBS. “Let’s do this for him, let’s do that for him.”

Then they noticed a mention in the article that Tertsea hadn’t seen his mom in four years, and decided to bring her to the U.S. for graduation.

The class needed enough money for a flight, visa and accommodations for Ikpum. During a bus ride to a senior retreat, they were able to raise $1,600 under the guise that the money was being collected for a senior lunch.

Everyone knew that the money wasn’t actually going toward a lunch — everyone except for Tertsea, who even threw in a few bucks.

Although the class raised a significant amount of money, they came up $500 short. But once a faculty member caught wind of this, they were able to raise the additional funds within an hour — and Ikpum was able to make her way to the U.S.

“I think it defines our class really,” Patel told The Baltimore Sun of the experience. “It’s a testament to our unity.”