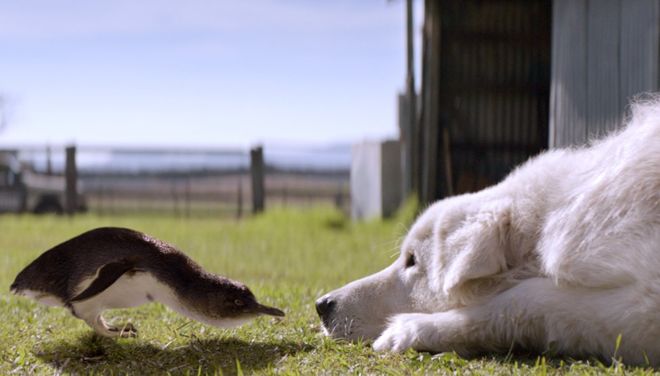 The Dogs that Protect Little Penguins

When foxes discovered little penguins on a small Australian island, they nearly wiped the colony out. But a farmer came up with a novel way to protect the birds – and the story has been made into a hit film.

As a premise for a film, think Lassie meets Babe meets Pingu. What’s not to like?

Middle Island, a beautiful, rugged and windswept outcrop off the coast of southern Victoria is home to a colony of the world’s smallest penguins.

Originally known as fairy penguins, before some pen-pusher deemed that politically incorrect, they’ve now been given the far more dreary sounding title of little penguins.

There used to be hundreds of them on Middle Island – but that was before the foxes got to them.

“We went from a point where we had around 800 penguins down to where we could only find four,” says Peter Abbott from the Penguin Preservation Project.

“In our biggest bird kill, we found 360 birds killed over about two nights. Foxes are thrill killers. They’ll kill anything they can find.”

That particular incident was in 2005, but the problem had been building up for a few years. Middle Island – which is uninhabited by humans – is separated from the mainland by a stretch of water measuring no more than 20 or 30m.

At low tide, and when sand builds up in the narrow channel, foxes can cross from the mainland barely getting their paws wet.

The problem first became apparent in the year 2000 when the sea’s natural current led to increased sand build-up.

Over time the fox population grew as it became clear they had an easy source of food.

The fairy penguins, as I’m going to call them, faced being wiped out on Middle Island – until a chicken farmer, by the made-for-cinema name of Swampy Marsh, came up with a plan. He suggested sending one of his Maremma dogs to protect the birds.

“In Australia those dogs are generally used for chicken protection or goats or sheep,” says Abbott.

The dog, the first of several to be used on Middle Island, was called Oddball – and Oddball made quite an impact.

“We immediately saw a change in the pattern of the foxes,” says Abbott.

“Leading up to when the dog went on the island, every morning we’d find fox prints on the beach. Putting a dog on the island changed the hierarchy. The foxes can hear the dogs barking, they can smell them so they go somewhere else.”

Amazingly, since Oddball and his four-legged successors were introduced 10 years ago, there has not been a single penguin killed by a fox on Middle Island.

The fairy penguin population has gone back up to almost 200.

The current dogs patrolling Middle Island are Eudy and Tula, named after the scientific term for the fairy penguin: Eudyptula.

They are the sixth and seventh dogs to be used and a new puppy is being trained up by Peter Abbott and his team to start work in 2016.

The dogs operate in the penguin’s breeding season, usually from October to March, when they spend five or six days a week on the island.

Even when the dogs are not there, their lingering scent is enough to keep the foxes away.

The project has been such a success that a movie called Oddball has been made about it.

“It’s a great story. We’re trying to save a cute penguin with a couple of cute dogs but the movie has taken things to a different level,” says Abbott.

The film has already taken around 11m Australian dollars ($8m; £5.3m) at the box office here and is now heading for global audiences.

“The movie had been in the pipeline for many years,” says Kristen Abbott from the Middle Island Project Committee.

“Many of us thought, ‘Yeah, we’ll believe it when we see it,’ and then suddenly it was pandemonium in the town with video cameras and actors everywhere.”

It has provided a huge boost for tourism – and in the summer months people can visit the island on a “Meet the Maremma Tour”.

“It’s been one of the best things that’s happened for a long time,” says John Watson who runs a local hotel.

“It’s filled a lot of extra bed nights for us with tourists coming down to either meet the dogs or do a tour of the island.”

Many of the locals appeared as characters in the film and others worked as extras on set.

“My character was played by an American actor,” says Peter Abbott. “I tell people it’s because they couldn’t find an Australian as good looking as me.”