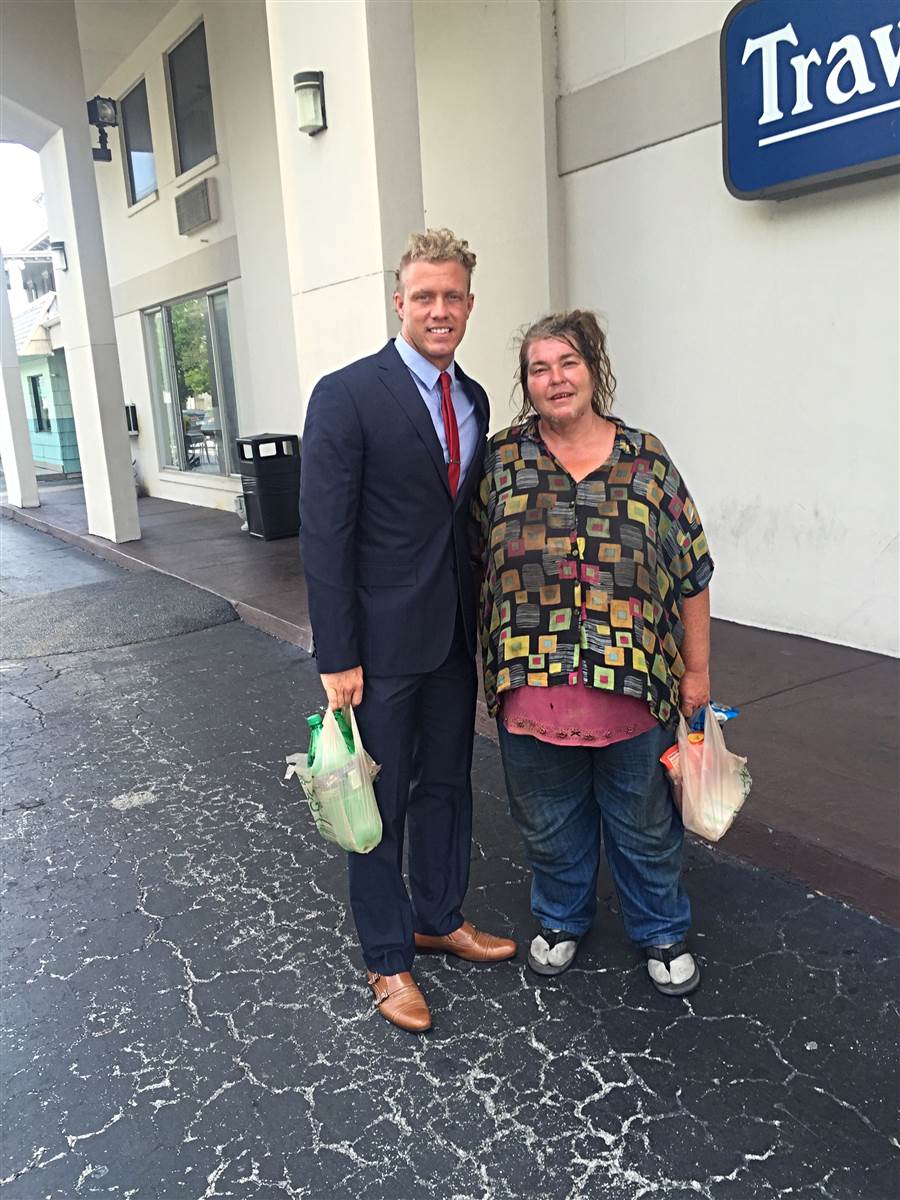 Amy Joe stood out to Greg Smith, who passed by her every single day for a week on his way to work in downtown Orlando, Florida.

He knew there was something special about her from the beginning. While the rest of the people living on the streets asked him for money, she always told him to have a nice day — which never went unnoticed.

“Good morning sir, have a great day. God bless!” she would say.

“She never failed to put a smile on my face and I ended up having a better day because of her cheerful greeting from the morning,” Smith, 25, told TODAY.

As a salesman for office equipment, he often spends his days visiting different businesses in the area. When one of his appointments got canceled on April 5, Smith found himself with some time on his hands, and asked Amy Joe to lunch.

The 48-year-old homeless woman agreed, with a bit of hesitation, but she wasn’t in any condition to turn down a free meal. So the two of them got to know each other over Subway sandwiches, and have continued to meet every Tuesday for lunch ever since.

Smith learned that she hails from England and still has family living there. She also told him she enjoys going to the lake and being around birds, but it wasn’t until their third lunch date that he discovered where her true passion lies.

It turns out that Amy Joe really wants to learn how to read, but being homeless makes the effort challenging.

“It took my breath away. I couldn’t fathom what she’s been through growing up and not being able to read,” Smith said. “She glowed with happiness after I told her that I’d love to help her with it.”

As it turned out, Smith had a copy of Josh Hamilton’s “Beyond Belief” — which is about finding the strength to come back after hard times — in his truck. He used it to start helping her right away.

He’s hoping this will help her get back on her feet and thinks the subject of the book he just so happened to have on him was a promising sign.

Smith also started an online fundraiser for Amy Joe, and has even put her up in a hotel for a few days to help move along the process.

“She’s not completely illiterate, but struggles with comprehension,” Smith explained. “She can read most words, but doesn’t understand what sentences mean when you put it all together.”

Smith says Amy Joe is eager to learn, which helps him guide her. He’ll read a paragraph, and then she’ll read it and ask him questions about grammar or the meaning behind certain words. When they get through “Beyond Belief,” Smith plans to pick another book she can relate to.

“She’s really blown me away with how fast she’s picking it up!” he said

“You never know what you can do for someone until you try,” Smith wrote on Facebook. “Who is your Amy Joe?”