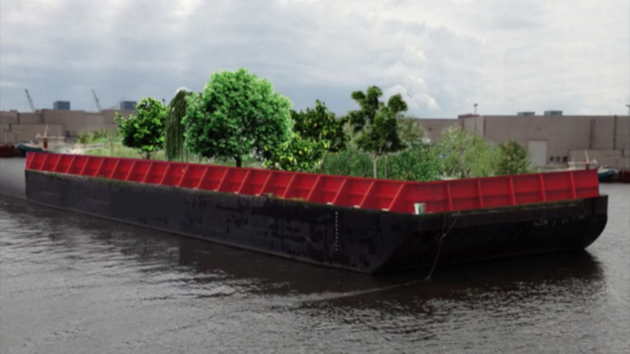 What if Healthy Food Could Be a Free Public Service?

If you like to eat local, this may float your boat.

New Yorkers will soon be able to pick apples, arugula and rosemary — for free — from an edible forest planted on top of a barge. The vessel and project, named Swale, will glide along New York City’s waterways, docking at locations like Brooklyn Bridge Park and Governor’s Island starting early this summer.

“The question we really want to ask are almost utopian: What if healthy, fresh food could be a free public service and not just an expensive commodity?” Mary Mattingly, the Yale fellow and artist who conceptualized the project, told Tech Insider.

The project’s name, Swale, derives from a Middle English term for a low marsh. The forest will have a foundation of wetland greenery that can suck up water, filter it and then use it to feed 80 varieties of plants that produce food like apples, figs, pears, scallions, rosemary, radicchio, arugula, bok choy, oregano and Chinese mountain yams.

The idea to have a forest, rather than an urban farm, stemmed from Mattingly’s personal experience.

In 2009, Mattingly and four other people lived on board another barge in the New York waterways called “Waterpod” for six months. The group collected rain water, used solar power, raised chickens and planted their own food. They were self-sufficient, but Mattingly found a flaw in the lifestyle. 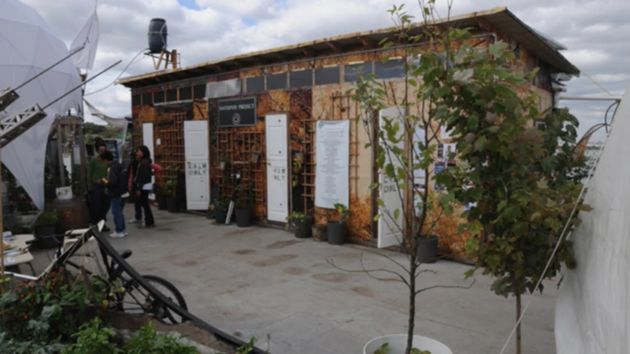 “We were spending pretty much all of our time farming for our food on board,” she told CityLab.

This is precisely why Swale will feature a perennial forest.

“Unlike traditional farming and gardening, food forests require less care in the long term,” she told Brooklyn Based. “They don’t have to be replanted each year, and once they are more established, they take care of themselves to a large extent.”

Sustainability even extends to the creation of the barge. The buoyant 80-foot by 30-foot structure — designed by Biome Arts and students from Stuyvesant High School, Dwight-Englewood School and Fairfield University — will be made of recycled shipping containers from The Port of New York and New Jersey, Tech Insider reports.

Swale will also feature Eco_Hack 2016, “a large-scale eco/social/digital installation and performance series,” that will host dance performances and poetry readings.

But the interactive art doesn’t end there.

“We’re putting digital sensors in the plant beds on Swale to gather environmental data like temperature, moisture, pH content, salinity,” Sally Bozzuto, a member of Biome Arts told Brokelyn. “Then we will be creating projections that visualize this data, so that you can get an idea of what’s going on with the forest by day by viewing the projections at night time.”

Mattingly intends for Swale to publicly launch on June 28. To contribute to the Kickstarter campaign, click here.